A Taste of Croatia

A Taste of Croatia

What’ll it be? Black risotto made with squid ink? Grilled sardines with garlic and lemon? Lamb and potatoes “under the bell”? This introductory tour of Croatia allows you to sample its local delicacies as well get a taste of the country’s greatest attributes. Modern coastal cities, magnificent medieval towns, and breathtaking natural wonders await at every turn. Get your fill of the lively cobblestone squares in the capital city of Zagreb, the magnificent Diocletian’s Palace in the seaside city of Split, the walled beauty of baroque Dubrovnik, and the magical waterfalls of Krka National Park. Walking tours of Ston, famous for its oyster farms, and Konavle, known for its lush vineyards, are also on the menu of this tasty tour of Croatia. 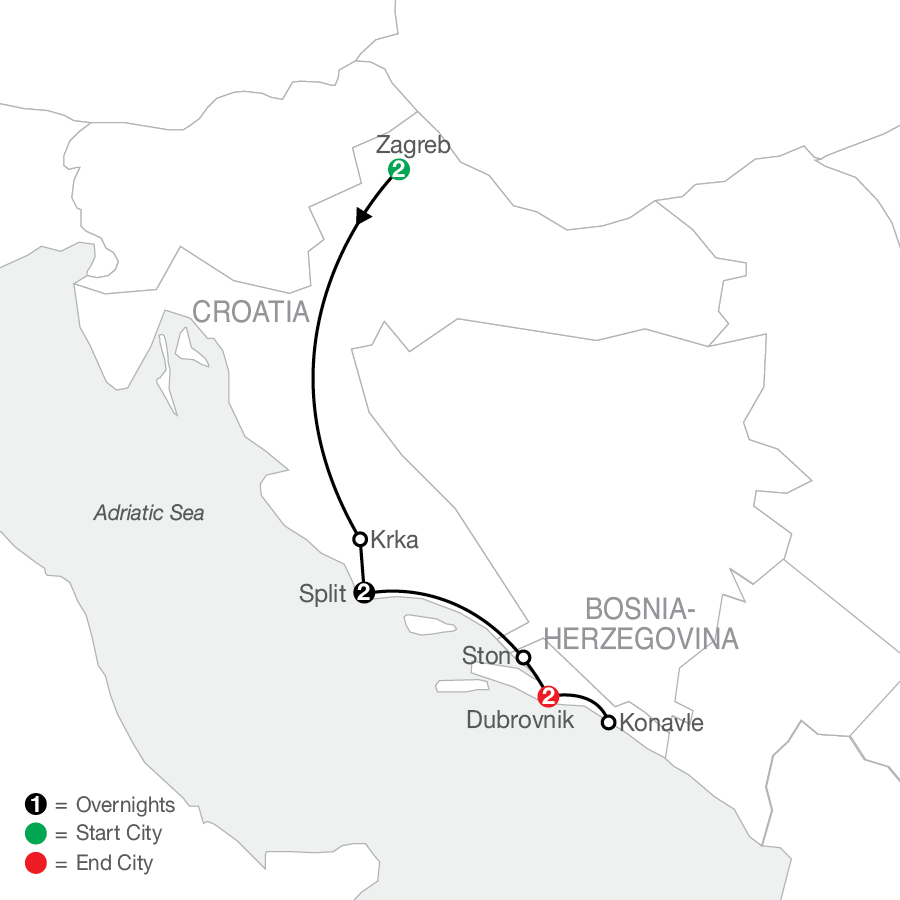 Highlights of A Taste of Croatia

We’ve packed everything you need for the perfect vacation—from hand-selected hotels and dining to the friendly expertise of Globus Tour Directors and Local Guides (with headsets to hear every word), to seamless transportation between destinations and VIP access to the world’s most iconic sites!

ARRIVE IN ZAGREB, CROATIA Welcome to Zagreb! At 6 pm, meet your Tour Director and travel companions for a welcome dinner at your hotel. (D)

ZAGREB Landmarks & Legends ZAGREB Guided sightseeing includes sights of the Parliament and Stone Gate. Free time this afternoon and evening. (B)TOUR HIGHLIGHTHISTORY & MYSTERY Explore the ancient city of Zagreb where Central Europe, the Mediterranean, and Southeast Europe meet with a magnetic culture amid medieval architecture and offbeat cafes and bars to enjoy. See the historic Croatian Parliament building – its first session recorded in 1273. In the Upper Town of Zagreb, admire the historic Croatian Parliament building and see the Stone Gate, the only fortification entrance that is still standing, and now home to the city’s most important shrine

ZAGREB–KRKA–SPLIT Cascades in Croatia KRKA [LF] Take a guided walking tour in the national park.SPLIT Enjoy dinner with regional specialties at a local restaurant. (B,D) 267 mi / 430 kmLOCAL FAVORITEWONDERS OF NATURE Take a walk through the waterfalls and wonderful natural beauty of Croatia’s captivating Krka National Park. This expansive preserve is shaped by the Krka River (Croatia’s longest river) which has carved gorges, created waterfalls, and sculpted canyons of remarkable beauty. Seven stunning waterfalls drop into pools below to create a serene sanctuary you don’t want to miss.

SPLIT The Emperor’s Escape SPLIT Your walking tour with a Local Guide includes Diocletian’s Palace. Free time this afternoon and evening. (B)TOUR HIGHLIGHTA LEGEND SLEPT HERE Discover one of the world’s best-preserved monuments to Roman architecture with a walking tour in Split. See the spectacular Diocletian Palace that was built for the Roman emperor Diocletian at the turn of the 4th-century AD, and forms nearly half of the Old Town of Split. Having served as the emperor's villa, summer house, and military camp, this ancient palace evokes the power and strength of the Roman Empire.

SPLIT–BOSNIA–HERZEGOVINA–STON–DUBROVNIK Ston Walls & Salty History STON [LF] Guided walking tour includes the walls and the salt pans. Free time before continuing to Dubrovnik. (B) 149 mi / 240 kmLOCAL FAVORITEHISTORIC SPOTS Explore the 900m fortress walls encircling the city of Ston - the second largest in the world after the Great Wall of China. You’ll also see the Ston salt pans – the oldest in Europe and the largest preserved in Mediterranean history. Here, the tradition of salt harvesting continues in the same way it has for over 4000 years from the resources of the sea, sun, and wind.

DUBROVNIK–KONAVLE–DUBROVNIK A King’s Landing DUBROVNIK Walking tour with a Local Guide.KONAVLE Walking tour and farewell dinner at a local restaurant. (B,D) 19 mi / 30 kmTOUR HIGHLIGHTART & ARCHITECTURE It isn’t hard to see why the city of Dubrovnik is known as the “Pearl of the Adriatic.” The old town surrounded by its remarkable city walls is protected by UNESCO. Over the centuries this breathtaking city has been an inspiration to many artists. Game of Thrones fans may recognize this formidable setting and the Rector’s Palace as a film location for the epic TV series.

DUBROVNIK Safe travels until we meet again! Your vacation ends with breakfast this morning. (B)