Even if you’re not bold enough to try bubble and squeak, haggis and tatties, or cockles and laverbread, you’ll still enjoy this perfect sampling of England, Scotland, and Wales. Our most popular tour of Britain, this tri-country introductory vacation has something for everyone. History buffs will treasure prehistoric Stonehenge, the Roman ruins of Bath and the medieval cities and towns such as York and Ludlow. Music lovers will cherish the music-festival town of Llangollen and The Beatles’ home city of Liverpool. Literary fans will relish the countryside homes of William Shakespeare and Sir Walter Scott. And beer and whisky connoisseurs will delight in the dimly lit pubs from London to Edinburgh and back where if you just can’t bring yourself to taste the black pudding, there’s always delicious fish and chips! 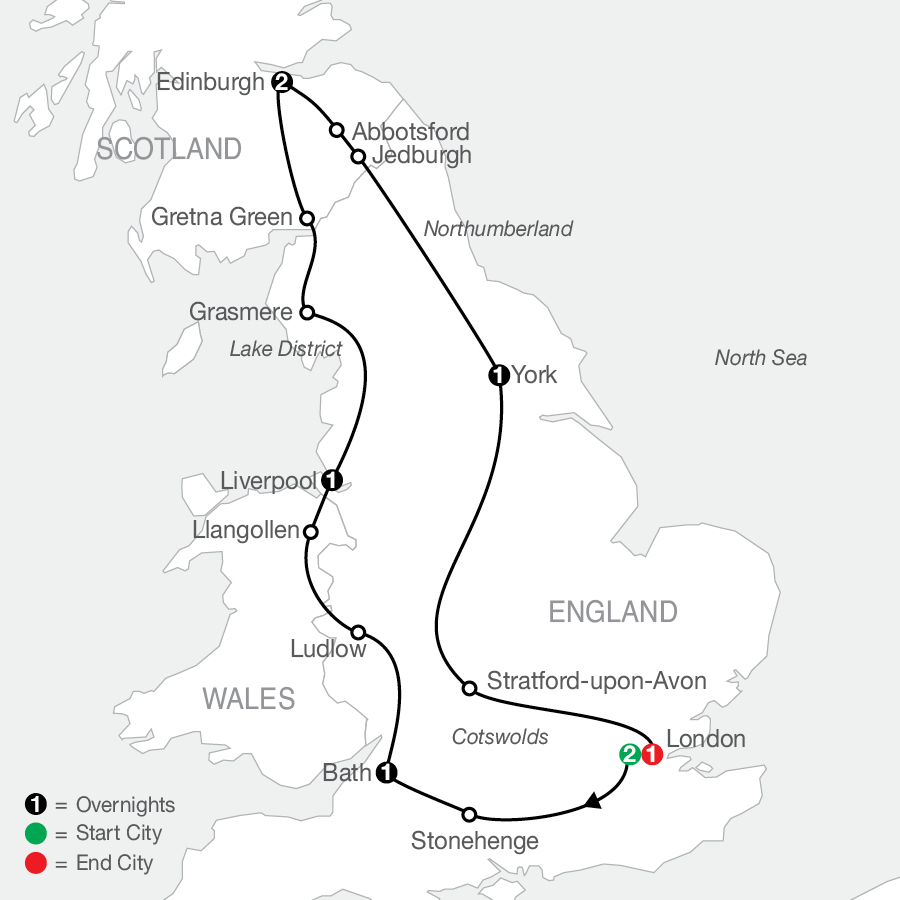 We’ve packed everything you need for the perfect vacation, from hand-selected hotels and dining to the friendly expertise of Globus Tour Directors and Local Guides (with headsets to hear every word), to seamless transportation between destinations and VIP access to the world’s most iconic sites! Touring by private, first-class, air-conditioned motorcoach with free Wi-Fi.Departure 19 June: due to closure, Stonehenge visit replaced by Salisbury Cathedral visit.

ARRIVE IN LONDON, ENGLAND Welcome to London! Uniformed Globus Hosts will be waiting to welcome you. Free time this afternoon.

LONDON The Royal Treatment LONDON Morning sightseeing with a Local Guide includes sights of the Houses of Parliament, Big Ben, Westminster Abbey, Whitehall, Prime Minister’s Downing Street residence, Piccadilly Circus, Buckingham Palace, and a visit to St. Paul’s Cathedral. Free time this afternoon. (B)TOUR HIGHLIGHTHISTORIC SITES See the legendary landmarks of England’s historic capital city. Walk where voices have rung out for centuries in Parliament Square and where chimes rise high above you with the ringing of Big Ben’s quarter bells. See Westminster Abbey, where royal coronations, weddings, and funerals have made history.

LONDON–STONEHENGE–BATH Ancient Stones & Spa Days LONDON Meet your Tour Director and travel companions at 8 am before departing for Stonehenge.STONEHENGE Join a guided visit. (Departure 19 June: due to closure, Stonehenge visit replaced by Salisbury Cathedral visit).BATH Visit the excavations of the Roman Baths. Free time the remainder of the day. (B,D) 139 mi / 224 kmTOUR HIGHLIGHTCULTURAL GEMS The traditions of one ancient Roman ritual are in full flow in Bath. Amid the remarkable Roman and Georgian architecture and the best-preserved Roman Baths of this UNESCO World Heritage Site, a good spa day is never hard to find in one of the “Best Spa Towns in Europe.” The city of Bath sits above geothermal springs that bubble up from the limestone below. Bath also turns up the heat with some of Britain's grandest Georgian buildings, a mecca for elite 18th-century society.

EDINBURGH Crown Jewels & Castle Views EDINBURGH Morning city sightseeing with a Local Guide includes the New Town, the Old Town, and a visit to Edinburgh Castle to see Scotland’s Crown Jewels. Free time this afternoon.EDINBURGH MILITARY TATTOO Attend the world-renowned Royal Edinburgh Military Tattoo performance. (Departures July 31 through August 21 only). (B)TOUR HIGHLIGHTMUSIC & MASTERPIECES Ascend to Castle Rock to explore Edinburgh Castle, one of the most important historical strongholds in the Kingdom of Scotland, with an 11,000-year history as "the most besieged place in Great Britain". Here, you’ll find the royal regalia and Scotland’s Crown Jewels. The Castle forms the background of the spectacular Royal Edinburgh Military Tattoo, an extravaganza of bagpipes and drums performed en masse in August each year.

EDINBURGH–ABBOTSFORD–JEDBURGH–YORK, ENGLAND Augustine’s Monks & Medieval Markets ABBOTSFORD Take a guided tour of Sir Walter Scott’s Abbotsford House.JEDBURGH Take photos of the Augustinian abbey ruins.YORK See York Minster on a guided walk through The Shambles. (B,D) 202 mi / 325 kmTOUR HIGHLIGHTHISTORIC SPOT While strolling the cobblestones of York’s Shambles, it’s easy to imagine the medieval butcher shops and boisterous crowds bartering for beef and bones outside the 14th-century timber-framed windows. The Shambles is one of the best-preserved medieval shopping streets in Europe, said to have been the inspiration behind Harry Potter’s Diagon Alley, and today is a vibrant gathering place with cheerful cafés and quirky boutiques brimming with the sweet aromas of chocolate, pastries, and pies.

YORK–STRATFORD-UPON-AVON–LONDON Mr. & Mrs. Shakespeare STRATFORD-UPON-AVON See Anne Hathaway’s Cottage. Visit Shakespeare’s Birthplace. (B) 256 mi / 411 kmTOUR HIGHLIGHTA LEGEND SLEPT HERE Ah, young love! Even more true, as Shakespeare’s fiancée was eight years his senior. See Anne Hathaway's Cottage, the family home where the bard’s wife-to-be was born and courted by young Will. Built more than 500 years ago, much of the original structure remains. Visit Shakespeare’s Birthplace and family home in the heart of Stratford-upon-Avon. Hear tales about his family life, marriage, and children with a close look at fascinating artifacts in a world-class collection assembled by the Shakespeare Birthplace Trust.