Equal parts fresh air, fresh cuisine, and joyous laughter, the enviable Mediterranean lifestyle is based on the simple concept of balance. Seven nights on land and seven nights at sea strike the perfect equilibrium between ruins and resorts, baklava and beaches, and mythical gods and sun worshipers on this airy Mediterranean land and cruise tour. After journeying from temple to fascinating temple on our Classical Greece tour, you’ll sail from port to breathtaking port to take in the mesmerizing sights of Ephesus, coastal Turkey, and the Greek Isles. The island cruising begins on the cultural coast of Rhodes and continues to the glittering isles of Crete, Santorini (weather permitting), Milos, and Mykonos, all while the sirtaki—the lively dance made popular in the classic movie Zorba the Greek—is a joyous constant throughout this big fat Greek vacation. 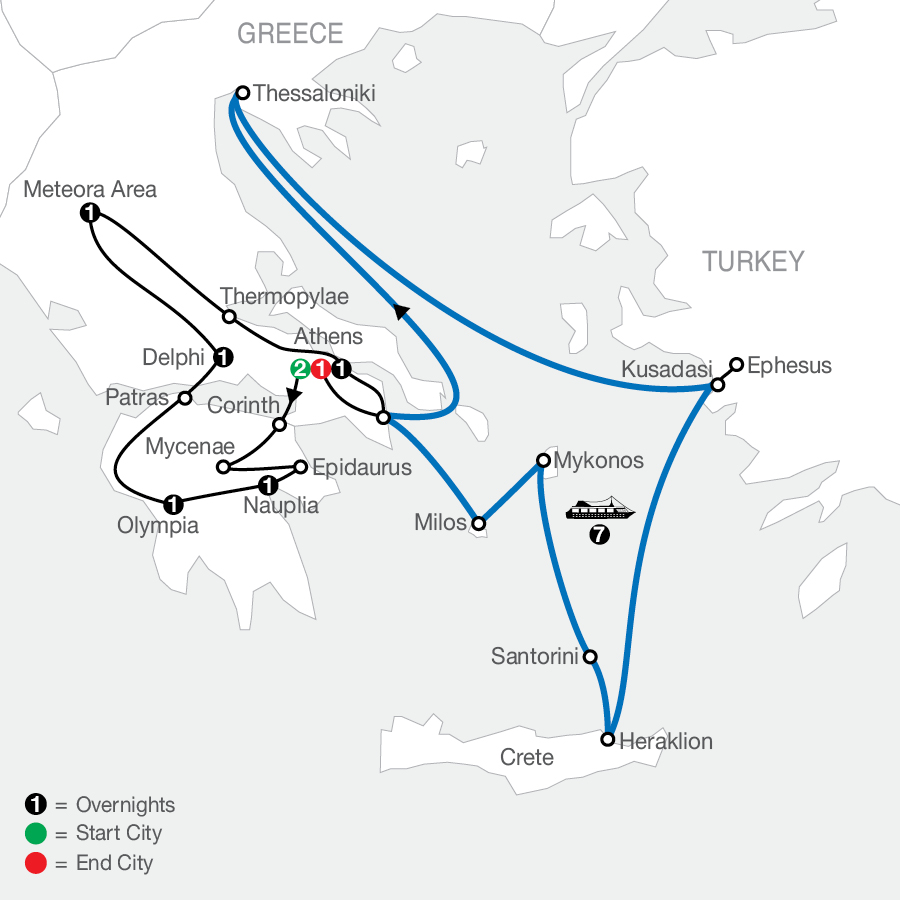 Port Taxes $269 & Gratuities $70 to service personnel on board the ship are not included but are additional and mandatory. These fees will be added to your Vacation Estimate. Gratuities for Cruise Host are included in the Globus price.

ARRIVE IN ATHENS, GREECE Welcome to Athens! At 6 pm, meet your Tour Director and traveling companions for a welcome drink.

ATHENS Marvels & Myths ATHENS Guided sightseeing includes a visit to the Acropolis and a stop at the Panathenaic Stadium. Free time this afternoon and evening. (B)TOUR HIGHLIGHTHISTORIC SPOTS Explore the heart of Ancient Greece, in the historic empire where 5th-century BC landmarks, including the Acropolis, never fail to amaze! See the Panathenaic Stadium, one of the venues of the first modern Olympic Games.

ATHENS–CORINTH–MYCENAE–EPIDAURUS–NAUPLIA Greek History & Heroes CORINTH Cross the canal and visit ancient Corinth.MYCENAE Free time for lunch. Guided visit of the excavations and museum.EPIDAURUS Guided visit to the 2,300-year-old open-air auditorium before continuing to Nauplia. (B,D) 132 mi / 212 kmTOUR HIGHLIGHTCULTURAL GEM The outdoor auditorium of Epidaurus combines perfect mathematic proportion with excellent acoustics. This fascinating archaeological treasure was used for the healing of patients from all over Greece and was dedicated to Asklepios, the god of healing.

NAUPLIA–OLYMPIA Ruins & Recipes Take a scenic drive through the Arkadian Mountains.OLYMPIA Join a guided visit to the archaeological site and the museum. [LF] Attend a cooking demonstration this evening to learn how to make traditional Greek tzatziki. (B,D) 112 mi / 181 kmLOCAL FAVORITE LOCAL TASTES Dip into the delicious tradition of Greek tzatziki – a mix of yogurt, cucumbers, garlic, salt, olive oil, vinegar, lemon juice, and herbs such as dill, mint, parsley, and thyme. Learn how to make this quintessential recipe loved the world over.

OLYMPIA–PATRAS–DELPHI Digs & Dances Drive by the busy seaport of Patras.DELPHI Join a guided visit to the excavations and Archaeological Museum. This evening, [LF] learn how to dance the sirtaki while sipping a glass of ouzo. (B,D)149 mi / 239 kmLOCAL FAVORITE CULTURE & TRADITION Dance in the steps of Zorba the Greek to learn the sirtaki. This passionate and dramatic dance goes very well with a glass of ouzo, the anice-infused drink the locals are so fond of.

DELPHI–METEORA AREA Monasteries in Magical Greece Drive past Lamia and Trikala en route to Kalambaka.METEORA Guided visit of the Varlaam and St. Stephen’s Monasteries. (B,D) 155 mi / 249 kmTOUR HIGHLIGHT SACRED SITES Perched atop soaring huge cliffs are the monasteries of Meteora, of which six are still active. Visit the beautiful monasteries of Varlaam and St. Stephen’s to marvel at this serenely mystical landscape with breathtaking views from above. Long revered for the perfect monastic retreat from the world outside, Meteora’s spectacular array of massive sandstone cliffs create a surreal setting unlike any other.

METEORA AREA–THERMOPYLAE–ATHENS Grecian Battles & Beauty THERMOPYLAE Stop at the battle site.ATHENS Free time late afternoon and evening. (B) 236 mi / 380 kmTOUR HIGHLIGHT LEGENDARY LIVES The story of the Battle of Thermopylae is hard to beat for drama. You may recognize this tale of the heroic, yet doomed Spartans of 480 BC fighting against the Persian army, which is dramatized in the film “300.” Their brave battle endures as a valiant symbol of bravery and sacrifice for a patriotic cause.

ATHENS (EMBARKATION) Beyond the Shore ATHENS Embark on your Greek Islands cruise. (B,D)TOUR HIGHLIGHTPICTURE PERFECT Set sail from Athens for a captivating course on the blue Aegean Sea to explore the exquisite beauty of the Greek Islands and Turkey. Marvel at the beauty of the island of Mykonos, also known as the island of the winds, revel in the unspoiled panoramas of Patmos, the magic of medieval Rhodes, Minoan Crete, and serene Santorini—with a special stop on the Turkish coast to see the amazingly preserved Greek, Roman, and Byzantine excavations of Ephesus.

CRUISING: THESSALONIKI Island Life & Times THESSALONIKI Free time to explore. (B,L,D)FREE TIME TIPSEXPLORE MORE in the Greek port city of Thessaloniki on the Aegean Sea. You’ll find remnants of fascinating Roman, Byzantine and Ottoman history in this cultural capital of Greece. Dine on delicious Greek specialties and wander the lively streets, or simply stretch out on the shore to take it all in.

CRUISING: KUSADASI, TURKEY Turkish Treasures KUSADASI Visit the excavations of Ephesus. (B,L,D)TOUR HIGHLIGHT HISTORIC SPOT Pull into port in Turkey to explore the fascinating Greek, Roman, and Byzantine excavations of Ephesus - one of the best-preserved ancient cities in the world – with the historic ruins of the Library of Celsus, the Basilica of St. John, and the Temple of Artemis.

CRUISING: RHODES, GREECE Blue Heaven RHODES Enjoy a full day in port with guided sightseeing of the Acropolis of Lindos. (B,L,D)TOUR HIGHLIGHTHISTORIC SIGHTS Rhodes is one of the most beautiful Islands in Greece. In addition to its gorgeous beaches, you’ll see the fascinating archaeological ruins of the legendary Lindos Acropolis – standing over 100 meters above the sea.

CRUISING: MYKONOS Mediterranean Magic MYKONOS Enjoy free time in Mykonos. (B,L,D)TOUR HIGHLIGHTCULTURAL GEMS Your dreams of the Greek Islands come true with free time in Mykonos. This Aegean paradise of pristine waters and beaches, mixed with a lively nightlife scene is only made brighter by the iconic 16th-century windmills that dot the hillside above.

MILOS Goddess of Love MILOS Enjoy free time to explore. (B,L,D)TOUR HIGHLIGHT NATURAL WONDERS Like love, Milos is both beautiful and dramatic in nature, with its enticing beaches and volcanic terrain. Here, an iconic statue was found hundreds of years ago – known as the famous Venus de Milo – a tribute to the Greek goddess Aphrodite.

ATHENS (DISEMBARKATION) Amazing Athens ATHENS Disembark From your ship for a free day in Athens. (B)FREE TIME TIPSEXPLORE MORE There are countless ways to enjoy free time in the birthplace of democracy, arts, science, and the philosophy of western civilization! Explore the urban landscapes and lively restaurants in this historic capital and enjoy the sunny slopes of this iconic city. Stroll in the shadow of the Acropolis in the village atmosphere of Plaka. Walk along the narrow cobblestone streets to browse jewelry stores and ceramics shops, then linger in a sidewalk café or taverna to celebrate your Greek adventure.

ATHENS Safe travels until we meet again! Your vacation ends with breakfast this morning. (B)