Like a Lazy Susan generously plated with cured herring, breaded schnitzel, rich fondue, and beef bourguignon, this aptly named European Sampler invites you to sink your teeth into four delectable countries and cultures. Designed to introduce you to the best of Holland, Germany, Switzerland, and France, this 9-day tour of Europe is an awakening for more than just your taste buds. All of your senses will perk up as you leisurely cruise along Amsterdam’s bridge-covered canals, dreamily float down the romantic Rhine, and journey through Germany’s picturesque Black Forest, Burgundy’s rolling green vineyards, and the white-capped peaks of the Swiss Alps. Along the way, you can expect a heaped helping of cities and villages, castles and palaces, and hand-carved cuckoo clocks to enhance your time in the most remarkable regions of Europe.Hungry for more European adventure? Board the high-speed Eurostar Train to London for fish ’n chips, bangers and mash, and bubble and squeak. When you add a 2-day London extension to your tour of Europe, we’ll also serve up guided sightseeing and plenty of optional excursions to make the most of your visit. 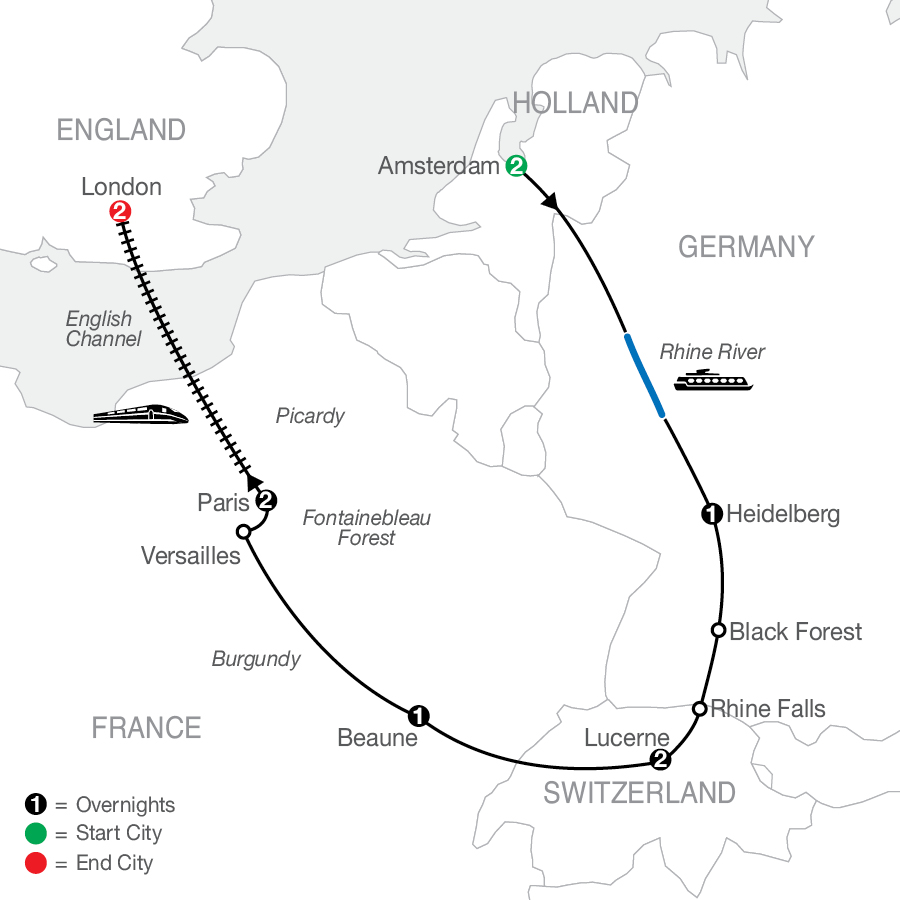 Highlights of European Sampler with London

ARRIVE IN AMSTERDAM, HOLLAND Welcome to Amsterdam! At 6 pm, meet your Tour Director and travel companions for a welcome dinner at your hotel. (D)

AMSTERDAM Holland Days AMSTERDAM Take a guided canal cruise. and visit a Diamond Centre, followed by free time this afternoon and evening. (B)TOUR HIGHLIGHTEPIC RIDE See the most fascinating views of Amsterdam on a canal cruise along the elegant grachten lined with homes dating back to the city’s “Golden Age.”

AMSTERDAM–HEIDELBERG, GERMANY Tradition on Tap in Heidelberg RHINE RIVER Enjoy a scenic cruise.HEIDELBERG Take an orientation walk through the Old Town. [LF] Enjoy dinner with beer at Kulturbrauerei Heidelberg restaurant. (B,D) 342 mi / 550 kmLOCAL FAVORITELOCAL TASTES Lift a glass of German beer in Kulturbrauerei Heidelberg brauhaus. Enjoy the famous tastes of Germany in this elegant and rustic beer house where hospitality is served in the heart of the brewery, along with legendary beers – both traditional and modern.

HEIDELBERG–BLACK FOREST–RHINE FALLS, SWITZERLAND–LUCERNE With Cherries on Top BLACK FOREST Enjoy a traditional woodcarving demonstration followed by Kaffee und Schwarzwaldkuchen (coffee and Black Forest Cake).RHINE FALLS Take pictures of the waterfalls.LUCERNE Walking tour includes the [LF] Bourbaki Panorama, the Lion Monument, and the Chapel Bridge. (B,D) 242 mi / 390 kmLOCAL FAVORITE CULTURAL GEM A monumental panorama, a piece of European cultural heritage, and a symbol of Switzerland’s humanitarian tradition - the Bourbaki Panorama brings together a multitude of stories. It commemorates the internment of 87000 soldiers of the French Bourbaki army, who fled Switzerland in the harsh winter of 1871. Painted by the artist Edouard Castres who personally witnessed the internment as a Red Cross worker and put his feelings on display in a most impressive way in 1881. A true journey back to the time in which Switzerland and its self-image were formed in the service of humanity, tolerance, and human rights.

LUCERNE Sweet Sights of Switzerland LUCERNE Enjoy a free day. (B)FREE TIME TIPS EXPLORE MORE What better way to spend this free day than with an excursion to the top of Mt Pilatus? Ascend via the world’s steepest cogwheel railway passing the exquisite alpine meadows and dramatic rock formations. Take in spectacular views of central Switzerland. Feel on top of the world because you are! Send a yodel across the Swiss peaks in the tradition of mountaineers of old.

LUCERNE–BEAUNE, FRANCE Bountiful Burgundy LUCERNE Take in the scenery during the drive to the vineyards of Burgundy.BEAUNE Visit the Hotel Dieu and take part in a [LF] wine tasting at Marché aux Vins. (B) 217 mi / 350 kmLOCAL FAVORITE LOCAL TASTES Go deeper into the legendary wines of Burgundy with a tour of the cellars of Marché aux Vins in Beaune. Taste a variety of Burgundy wines, while learning about the vineyard and regional grape varieties in this bountiful region in one of France's main wine-producing areas. A votre santé

BEAUNE–VERSAILLES–PARIS Château of Kings & Queens VERSAILLES Guided visit of the Palace and Gardens en route to Paris. (B) 236 mi / 380 kmTOUR HIGHLIGHTLEGENDS SLEPT HERE When it comes to the Palace of Versailles, opulent is an understatement! This converted hunting lodge boasts 2300 rooms adorned in 17th century gilded French décor. Kings, Queens, and Emperors have called it home! Now a world- famous museum that promises its visitors a breathtaking experience.

PARIS C’est Magnifique in the City of Light PARIS Guided sightseeing includes an orientation drive and a scenic Seine River cruise. (B)TOUR HIGHLIGHTCITY SIGHTS As the song goes, we love Paris in the springtime; we love Paris in the fall - but no matter the season, we fall in love anytime we visit the most romantic city in the world. From the tempting shops of the Champs-Élysées to the irresistible charms of a corner café, your hearts are set on sharing France’s captivating City of Light any time you please.

PARIS–LONDON, ENGLAND Just in Time for Tea Travel by high-speed Eurostar Train to London, arriving in the afternoon. Today’s Distance: 305 mi / 492 km (B)TOUR HIGHLIGHTEPIC RIDE Take the fast train to London on the Eurostar - the only high-speed rail directly linking the UK to France. Since 1994, passengers have been whisked through the longest section of underwater tunnel in the world in comfort with speeds up to 200 mph.

LONDON London’s Calling Guided sightseeing includes St. Paul’s Cathedral. (B)TOUR HIGHLIGHTHISTORIC SPOTS England’s national treasure of St. Paul’s Cathedral is home to a spectacular array of art – from delicate carvings to gilded dome murals and modern works of art. As the seat of the Bishop of London, the cathedral serves as the mother church of the Diocese of London, where notable remembrances have been served here, including Queen Victoria’s jubilee, birthdays of Queen Elizabeth II, and funerals of luminaries like Winston Churchill and Margaret Thatcher.