From the Shannon to the Thames

From the Shannon to the Thames

Beloved music, literature, and poetry; lively traditions, customs, and conversation; smooth Guinness, whisky, and ale—they all flow from the banks of one legendary river to another on this immersive tour of Ireland, Scotland, and England. From the ancient villages along the Shannon to the cathedrals and castles lining the Thames, this tour of Ireland and Britain invites you to splash about in four distinctive countries and cultures. Enjoy traditional tea at a 150-year-old Irish farmhouse, follow the sounds of haunting bagpipes in Edinburgh’s quirky quarters, and quote famous verse as you stroll around Shakespeare’s birthplace in the English countryside. With a compass pointed toward enlightenment and enchantment, this vacation to Ireland and Britain is overflowing with seaside scenery, Highland history, and cobblestone charisma. 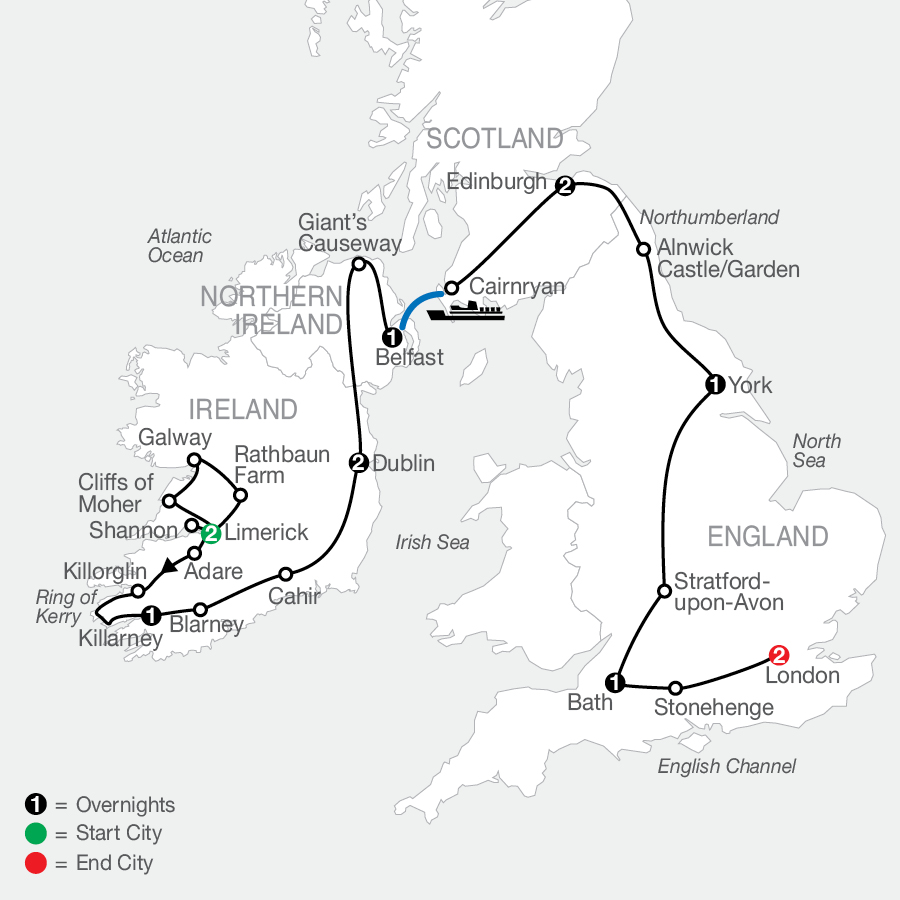 Highlights of From the Shannon to the Thames

We’ve packed everything you need for the perfect vacation, from hand-selected hotels and dining to the friendly expertise of Globus Tour Directors and Local Guides (with headsets to hear every word), to seamless transportation between destinations and VIP access to the world’s most iconic sites! Touring by private, first-class, air-conditioned motorcoach with free Wi-Fi; Irish Sea ferry.

From The Shannon to the Thames

ARRIVE IN SHANNON, IRELAND–LIMERICK Céad mile fáilte—a hundred-thousand welcomes! This evening, meet your Tour Director and travel companions for a welcome dinner at your hotel. (D)

LIMERICK. EXCURSION TO CLIFFS OF MOHER & GALWAY Seacliff Rocks & Sheep Flocks CLIFFS OF MOHER Visit the 668-foot-high cliffs above the Atlantic Ocean.GALWAY Free time.RATHBAUN [LF] Watch the farmer shear a sheep and maneuver a flock with a help of a sheep dog, and enjoy traditional tea at Rathbaun Farm. (B) 159 mi / 255 kmLOCAL FAVORITECULTURE & TRADITION The Irish legacy of sheep herding and wool shearing is alive and well just outside of Galway. Experience the long-time traditions of farming life in Ireland both past and present and talk to the farmers.

LIMERICK–ADARE–RING OF KERRY–KILLARNEY Beauties in Counties Clare & Kerry ADARE Stop at the quaint village to see its pretty thatched cottages.RING OF KERRY Panoramic drive around part of Ireland’s spectacular southwestern peninsula.KILLARNEY Free time. (B,D) 157 mi / 253 kmTOUR HIGHLIGHTNATURAL WONDERS Explore the emerald tapestries of green fields and ocean views that make other coastlines green with envy. The Ring of Kerry begins and ends in Killarney, taking you on a trip along the southwest coast of Ireland. Discover a paradise of panoramic cliffs, lush landscapes, and breathtaking beaches of the Iveragh Peninsula.

KILLARNEY–BLARNEY–CAHIR–DUBLIN The Stone of Eloquence BLARNEY Visit the village renowned for its magical Kissing Stone.CAHIR Photo stop.DUBLIN Free time this afternoon. (B) 225 mi / 360 kmTOUR HIGHLIGHT LEGENDS & LORE Cut the blarney and hear the history of how telling tales is forever linked to the 15th-century castle and the village below in Blarney. One of the last estate villages that remain standing in Ireland, Blarney was built by an 18th-century landlord to house the castle workers there. It’s true!

DUBLIN–GIANT’S CAUSEWAY, NORTHERN IRELAND–BELFAST A Grand Ship & Giant Steps GIANT’S CAUSEWAY See more than 40,000 interlocking basalt columns formed millions of years ago.BELFAST Visit the Titanic Belfast Experience. (B) 216 mi / 348 kmTOUR HIGHLIGHTLEGENDS & LORE Follow in the legendary footsteps of giants at the foot of the cliffs along the coast of Northern Ireland, where 40,000 massive black basalt columns jut out of the sea. Hear the legendary myth of two battling giants that caused the magnificent geological wonder of Giant’s Causeway, actually formed by volcanic activity 50–60 million years ago.

BELFAST–EDINBURGH, SCOTLAND Strait to Scotland BELFAST Ferry crossing on the North Channel strait to Cairnryan on Scotland’s southwest coast. Continue with a scenic drive through Scottish border country to Edinburgh. (B) 132 mi / 212 kmTOUR HIGHLIGHTEPIC RIDE The North Channel (also called the Irish Channel) connects northeast Ireland to the southwestern coast of Scotland. The North Channel is part of the Ocean’s Seven, a set of seven long-distance open-water swims, although most who cross rely on the many ferries that run between Belfast and Cairnryan, the Scottish village with a proud maritime history, including its floating Mulberry Harbors built to support the D-Day invasion of Normandy.

EDINBURGH Drummers, Pipers & Precious Jewels EDINBURGH Morning city sightseeing with a Local Guide includes the New Town, the Old Town, and a visit to Edinburgh Castle to see Scotland’s Crown Jewels. Free time this afternoon.EDINBURGH MILITARY TATTOO Attend the world-renowned Royal Edinburgh Military Tattoo performance. (Departures August 2 through August 16 only). (B)TOUR HIGHLIGHTMUSIC & MASTERPIECES Ascend to Castle Rock to explore Edinburgh Castle, one of the most important historical strongholds in the Kingdom of Scotland, with an 11,000-year history as “the most besieged place in Great Britain.” Here, you’ll find the royal regalia and Scotland’s Crown Jewels. The Castle forms the background of the spectacular Royal Edinburgh Military Tattoo, an extravaganza of bagpipes and drums performed en masse in August each year.

EDINBURGH–ALNWICK, ENGLAND–YORK Lights, Camera, Alnwick! ALNWICK Visit Alnwick Castle, setting for many film productions. Choose between a tour of the castle or taking a stroll through the magnificent Alnwick Gardens.YORK See York Minster and browse the shops of The Shambles. (B)243 mi / 391 kmTOUR HIGHLIGHTHISTORIC SPOT While strolling the cobblestones of York’s Shambles, it’s easy to imagine the medieval butcher shops and boisterous crowds bartering for beef and bones outside the 14th-century timber-framed windows. The Shambles is one of the best-preserved medieval shopping streets in Europe and said to have been the inspiration behind Harry Potter’s Diagon Alley, and today is a colorful gathering place with cheerful cafés and quirky boutiques brimming with the sweet aromas of chocolate, pastries, and pies.

YORK–STRATFORD-UPON-AVON–BATH Sonnets & Springs STRATFORD-UPON-AVON See Anne Hathaway’s Cottage and visit Shakespeare’s Birthplace.BATH Visit the excavations of the Roman Baths. (B,D) 286 mi / 460 kmTOUR HIGHLIGHTCULTURAL GEMS The traditions of one ancient Roman ritual are in full flow in Bath. Amid the remarkable Roman and Georgian architecture and the best-preserved Roman Baths of this UNESCO World Heritage Site, a good spa day is never hard to find in one of the “Best Spa Towns in Europe.” The city of Bath sits above geothermal springs that bubble up from the limestone below. Bath also turns up the heat with some of Britain's grandest Georgian buildings, a mecca for elite 18th-century society.

BATH–STONEHENGE–LONDON Mysterious Monuments STONEHENGE Join a guided visit. (B) 131 mi / 210 kmTOUR HIGHLIGHTHISTORY & MYSTERY Ponder the who, what, why, and how of Stonehenge, one of the most impressive prehistoric megalithic monuments in the world. Its sheer size and sophisticated architectural design have earned it legendary reverence as the most famous prehistoric monument in the world. Although its original purpose is a mystery, the concentric monuments hold spiritual significance for people from around the world who gather at the massive stone circles to celebrate the summer solstice.