While you let your body float effortlessly in the seemingly magical waters of the Dead Sea, it’s your heart that will soar on this religious tour of Israel. The stories of Scripture don’t just come to life on this spiritual journey through the Holy Land – they truly jump off the page. See the location where Jesus was born, the field where the angels announced his birth, and the sites of some of the most repeated stories of the New Testament – including where Jesus walked on water, recruited four of his apostles, calmed the storm, and fed the multitude. From visiting the site of the first miracle in Cana to seeing the room of the Last Supper on Mount Zion, this religious journey will fuel your faith and feed your soul. 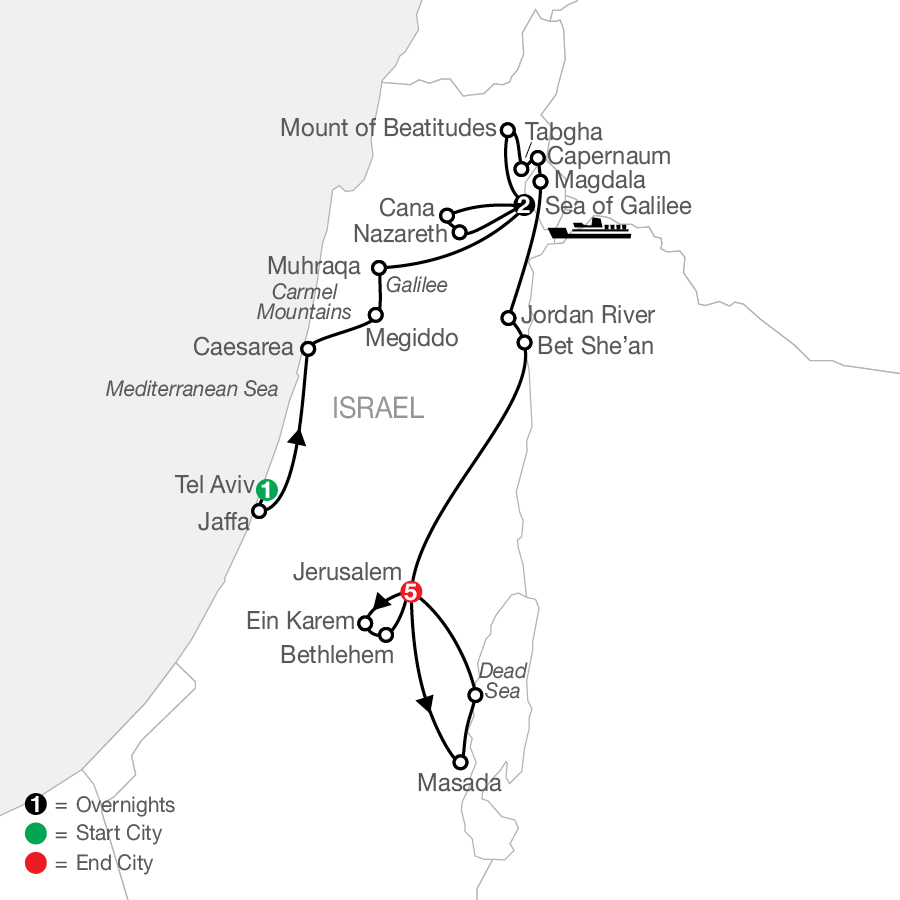 Highlights of Journey Through the Holy Land – Faith-Based Travel

Transportation: Motorcoach, Sea CruiseInclusions:We’ve packed everything you need for the perfect vacation—from hand-selected hotels and dining to the friendly expertise of Globus Tour Directors and Local Guides (with headsets to hear every word), to seamless transportation between destinations and VIP access to the world’s most iconic sites! Touring by private, first-class, air-conditioned motorcoach with free Wi-Fi.

Journey Through the Holy Land

Journey Through the Holy Land

Biblical Tells - Megiddo|Birthplace of Jesus: Church of the Nativity (Bethlehem)|Masada|Old city of Jerusalem and its Walls|White City of Tel Aviv - the Modern Movement

ARRIVE IN TEL AVIV, ISRAEL Welcome to Tel Aviv! This evening, meet your Tour Director and traveling companions for a welcome dinner at your hotel. (D)

SEA OF GALILEE. EXCURSION TO CANA & NAZARETH Fishers of Men CANA Take a guided visit to the city of Cana, where Jesus changed water into wine for the legendary wedding here. NAZARETH Visit the Church of the Annunciation and St. Joseph’s Church in the city where Jesus lived and worked as a carpenter. SEA OF GALILEE CRUISE Enjoy a scenic cruise on Lake Tiberias, see an ancient fishing boat said to be from the time of Christ, then enjoy some free time this afternoon and evening. (B,D)39 mi / 62 kmTOUR HIGHLIGHTMIRACLES IN THE MAKING In the New Testament, much of Jesus’ early ministry is reported to have occurred on the shores of the Sea of Galilee. The Gospels of Mark, Matthew, and Luke describe how ordinary fishermen, Simon, Andrew, John, and James were recruited by Jesus here. Many of Jesus’ miracles were performed on these waters, including walking on water, miraculous catching of fish, calming the storm, and feeding the multitude in nearby Tabgha, as well as the Sermon on the Mount. It is also here that John recounts the third appearance of Christ following his death and resurrection.

JERUSALEM. EXCURSION TO EIN KAREM, BETHLEHEM & THE GARDEN TOMB Joyful News EIN KAREM Visit the Church of St. John the Baptist and the Church of Visitation, honoring Mary’s visit to her cousin Elizabeth to share the news of the Immaculate Conception. BETHLEHEM Visit the Church of the Nativity, built on the site where Jesus was born. JERUSALEM Visit the Garden Tomb, believed to be the tomb from which Jesus rose from the dead. (B,D)34 mi / 55 kmTOUR HIGHLIGHTSACRED SITES The Church of the Nativity in Bethlehem is perhaps the most sacred of sites in Christianity and the oldest major church in the Holy Land. This basilica and UNESCO World Heritage Site is home to the holy Nativity Grotto, considered to be the cave in which Jesus was born and was laid in a manger. As the oldest continuously visited church in Christianity, the Church features the Altar of the Nativity, placed above the 14-point silver star marking the cave where Mary gave birth. Visible through the center of this star lies an actual rock, upon which it is believed Mary rested.

JERUSALEM. EXCURSION TO THE OLD CITY The Passion & The PromiseJERUSALEM A guided walking tour of the Old City includes the Mount of Olives, the Garden of Gethsemane, and the Via Dolorosa. Visit the Church of the Holy Sepulchre, see the Western Wall, Mount Zion, the Upper Room, and the Tomb of King David. (B)TOUR HIGHLIGHTJESUS’ FOOTSTEPS Walk the sorrowful path of Jesus along Jerusalem’s Via Dolorosa, where he carried the cross to his crucifixion on Calvary. Follow the stations of the cross to the Church of the Holy Sepulchre in commemoration of the Passion of Christ.

JERUSALEM The Cradle of ChristianityJERUSALEM Enjoy a free day to explore. (B,D)TOUR HIGHLIGHTSACRED SITES Considered the cradle of Christianity, the city of Jerusalem has been a Christian pilgrimage site for 2,000 years. It is mentioned in the Old Testament and was the site of significant events in the life of Jesus, brought here shortly after his birth. This is where he cleansed the temple of merchants and gamblers and years later shared the Last Supper with his apostles.

JERUSALEM. EXCURSION TO MASADA & THE DEAD SEA A Soldiers’ Stronghold & the Sea of Salt MASADA Ascend by cable-car to the clifftop fortress of Masada. DEAD SEA RESORT Spend free time this afternoon floating in the waters of the Dead Sea before returning to Jerusalem. JERUSALEM Enjoy a farewell dinner at your hotel this evening. (B,D)125 mi / 200 kmTOUR HIGHLIGHTHISTORIC SPOTS Explore the extraordinary cliffs of Masada, where the rebels fought against Rome and gave their lives in a desperate fight for freedom. Also known for the site of King Herod’s palace, Masada is a UNESCO World Heritage Site, National Park, and worldwide pilgrimage site. Below the plateau of Masada lies the Dead Sea, where you’ll float weightlessly atop the salt-rich waters of the desert.

JERUSALEM Safe travels until we meet again!Your vacation ends with breakfast this morning. (The nearest airport is Tel Aviv.) (B)