Layered like a slice of decadent tiramisu, Italy’s classic coffee and cocoa dessert, this satisfying tour of Italy is filled with its sweetest cities for a rich and rewarding vacation. How do you top the history, wonder, and charisma of Rome? With the world-class art of Florence, the alluring romance of Venice, the quiet serenity of Assisi, the historical fascination of Pompeii, and the pure indulgence of Capri. The satiating fun continues as you enter the vine-clad Tuscan hills famous for its signature Chianti wine—and speed across the glittering Bay of Naples to the citrus-scented town of Sorrento renowned for its locally produced Limoncello liqueur. You’ll have the opportunity to snap creative photos at the Leaning Tower of Pisa and devour more magnificent architecture—and artful cuisine—throughout this multi-tiered tour of Italy. 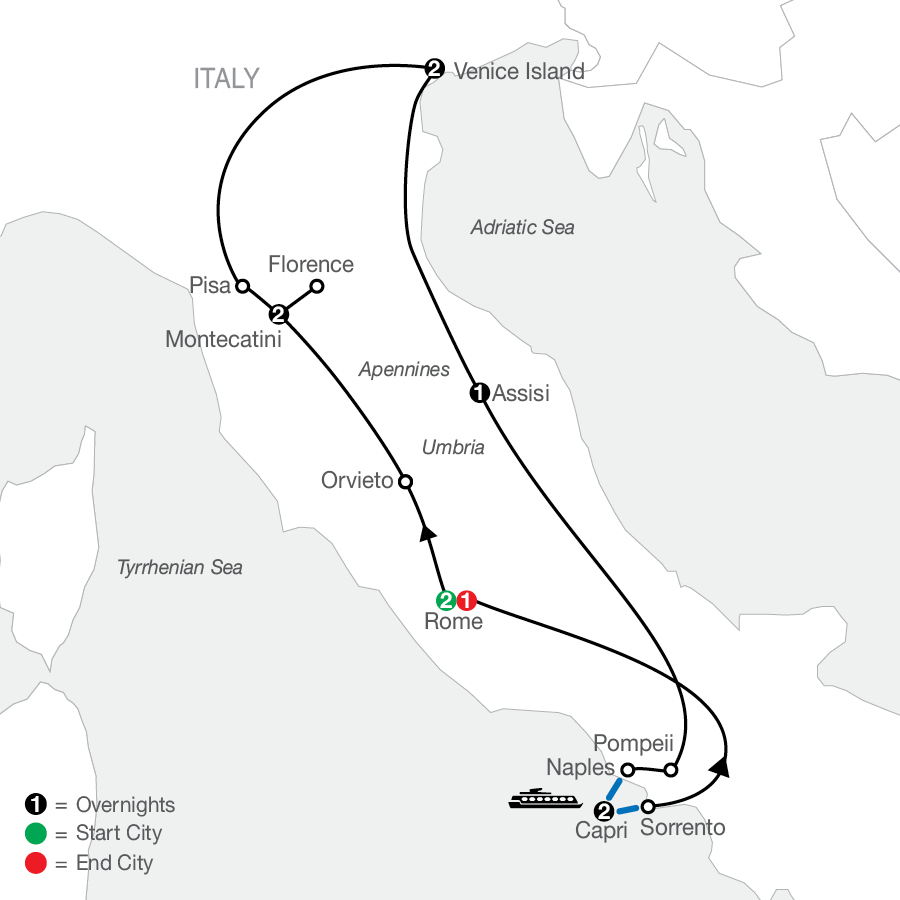 Highlights of The Best of Italy

ARRIVE IN ROME, ITALY Welcome to Rome! At 5 pm, meet your Tour Director and travel companions for a welcome dinner at a local restaurant. (D)

ROME When in Rome ROME Guided sightseeing includes the Vatican Museums, Sistine Chapel, and St. Peter’s Square and Basilica to admire Michelangelo’s Pietà. Visit the Colosseum and see the Roman Forum. Free time this afternoon and evening. (B)TOUR HIGHLIGHTLEGENDARY LIVES Stand in awe and wonder amid one of mankind’s greatest artistic achievements in the Sistine Chapel. Hear how in 1508, a young Michelangelo was commissioned by Pope Julius II to decorate the chapel’s ceiling – a request not welcomed by the 33-year-old sculptor. Michelangelo’s 4-year project was indeed one of physical pain and psychological distress, while painting from scaffolds high above the sanctuary floor. Nevertheless, he created what is considered the most famous ceiling in the world, depicting the Creation of Adam in striking fresco style.

ROME–ORVIETO–MONTECATINI Miracles and Men of the Cloth ORVIETO An orientation tour includes the cathedral with free time to visit San Brizio Chapel. Enjoy free time for lunch before departing for Montecatini. (B) 199 mi / 320 kmTOUR HIGHLIGHTHISTORY & MYSTERY Orvieto’s Cathedral is perched atop a volcanic hill in stunning style that features a large rose window, golden mosaics, and massive bronze doors. Inside, its frescoed chapels are adorned with spectacular works such as the Judgement Day, the coronation of Mary, the Pietà created by the great artist Scalza, and a spectacular organ with 5,585 pipes. Here, a blood-stained relic cloth is stored in the Chapel of the Corporal, remembrance of the 1263 miracle of Bolsena – when a priest who doubted his faith witnessed the Communion Host begin to bleed onto the altar cloth.

MONTECATINI. EXCURSION TO FLORENCE Italian Beauties FLORENCE Guided sightseeing includes Michelangelo’s masterpiece, David, at the Academy of Fine Arts, Giotto’s Bell Tower, the Baptistry’s heavy bronze “Gates of Paradise,” and Signoria Square. [LF] Taste a traditional gelato. Free time this afternoon. (B,D) 81 mi / 130 kmLOCAL FAVORITELOCAL TASTES After seeing some of the world’s most magnificent architecture and Rennaissance masterpieces in Florence, your day gets even sweeter with a mouth-watering masterpiece in the birthplace of Italian gelato. We can thank the actual Renaissance man - designer and architect Bernardo Buontalenti - who invented gelato in 16th-century Florence. Created with less fat and less air than commercial ice cream, gelato is a dense, creamy, frozen confection served in a multitude of tastes. Not an easy decision in how you’ll fill your cup or cone!

MONTECATINI–PISA–VENICE ISLAND The Tilted Tower PISA See the Leaning Tower en route to Venice. Free time for dinner. (B) 249 mi / 400 kmTOUR HIGHLIGHT ART & ARCHITECTURE See architecture gone askew from the viewpoint of the Piazza dei Miracoli in Pisa. Take the ultimate selfie in front of the Leaning Tower with a tilt of the head or other popular poses to commemorate your visit to this hub of European medieval art in Pisa’s beautiful piazza.

VENICE ISLAND Benvenuti a Venezia VENICE ISLAND Take a private boat ride on the canals. Guided walking tour includes St. Mark’s Square and Basilica, Doge’s Palace and the Bridge of Sighs followed by a glassblowing demonstration. Free time this afternoon and evening. (B)TOUR HIGHLIGHT HISTORIC SPOT Locals simply call Piazza San Marco “la piazza.” As paired with the smaller Piazzetta, it forms the social, religious, and political hub of Venice, which Napoleon called “the drawing room of Europe.” St. Mark’s Basilica dominates the square, offering visitors a spectacular view of the great arches, marble embellishments, and the Romanesque carvings of its façade. Also gracing the square is Doge’s Palace – a masterpiece of Venetian Gothic architecture. The enclosed Bridge of Sighs, connecting the palace with the prison, is named for the prisoners breathing in their last view of the Rio di Palazzo on their walk to the prison’s interrogation rooms.

VENICE ISLAND–ASSISI Medieval Marvels Scenic drive through the Apennine Mountains en route to Assisi.ASSISI Guided walking tour includes St. Clare’s Church and St. Francis’ Basilica. (B,D) 267 mi / 430 kmTOUR HIGHLIGHT ICONIC FOOTSTEPS Walk in the footsteps of St. Francis of Assisi with a visit to the Basilica named after the deacon, friar, and mystic, who became one of the most venerated religious figures in Christianity. Revered for his love of the Eucharist and the Earth, Francis found communion with God through nature here in this Italian village where he lived and died. Marvel at the magnificent frescoes by Italian master Giotto that adorn the Basilica where the Saint is buried.

ASSISI–POMPEII–NAPLES–CAPRI Time Standing Still in Pompeii POMPEII Join a guided walking tour of the excavations followed by free time for lunch.NAPLES Embark on a jetfoil ride to the island of Capri.CAPRI Take a funicular ride from the harbor to Capri village. (B,D) 292 mi / 470 kmTOUR HIGHLIGHT LEGENDS & LORE The fascinating archaeological site of Pompeii is a treasured glimpse into Roman life near the Bay of Naples. This once thriving and sophisticated Roman city was consumed by the catastrophic eruption of Mount Vesuvius in 79 A.D., with its residents and structures buried beneath inescapable ash and stone. See the preserved site of excavated ruins that reveal remarkable frescoes, artwork, and artifacts within its streets and the dwellings of the people who perished here.

CAPRI Coves & Cliffs on the Clear Blue Sea CAPRI Guided sightseeing includes an [LF] open-taxi ride to Anacapri to visit famous Villa San Michele. [LF] Take a scenic cruise (weather permitting) around the island. Free time this afternoon and evening. (B)LOCAL FAVORITE PICTURE PERFECT An open-taxi ride to Anacapri takes you to stunning Villa San Michele perched high above the breathtaking Bay of Naples. Swedish physician Axel Munthe dedicated much of his life to the construction of the villa and surrounding gardens. His masterpiece, the Story of San Michele, recounts of his wish for a “house open to the sun and wind and the voice of the sea, like a Greek temple, and light, light, light everywhere!” Follow your visit to the villa with a spectacular cruise around the isle of Capri.

CAPRI–SORRENTO–ROME Arrivederci, Roma CAPRI Embark on a jetfoil ride to Sorrento.SORRENTO Enjoy free time for lunch.ROME Join a farewell dinner at a local restaurant. (B,D) 174 mi / 280 kmTOUR HIGHLIGHT CULTURAL GEMS Just as the sirens of Greek mythology lured sailors to the rocky shores of Sorrento, we are drawn to its alluring panoramas, bistros, and boutiques. Take a seat in a sidewalk cafe to peruse the picturesque panoramas on the Bay of Naples.

ROME Safe travels until we meet again! Your vacation ends with breakfast this morning. (B)