Although you might be enthralled with the idea of the Spanish siesta—the customary post-lunch nap to escape the midday heat—you’ll want to think twice about catching any afternoon Zzzs on this dreamy introductory tour of Spain. Otherwise, you’d miss all the sunny sights this 9-day vacation to Spain has in store. From Madrid’s art-filled Prado Museum to Barcelona’s tree-lined La Rambla, we show you the country’s top must-see sights, indulging in pans of zesty paella, and pitchers of tangy sangria along the way. While you’ll treat yourself to the fresh catches from the sea, the olives from the hills, and the wine from the lush river valleys; it’s sights such as Granada’s opulent Alhambra complex, Seville’s over-the-top Plaza de España, and Barcelona’s unparalleled Sagrada Familia Basilica that are a feast for the eyes. 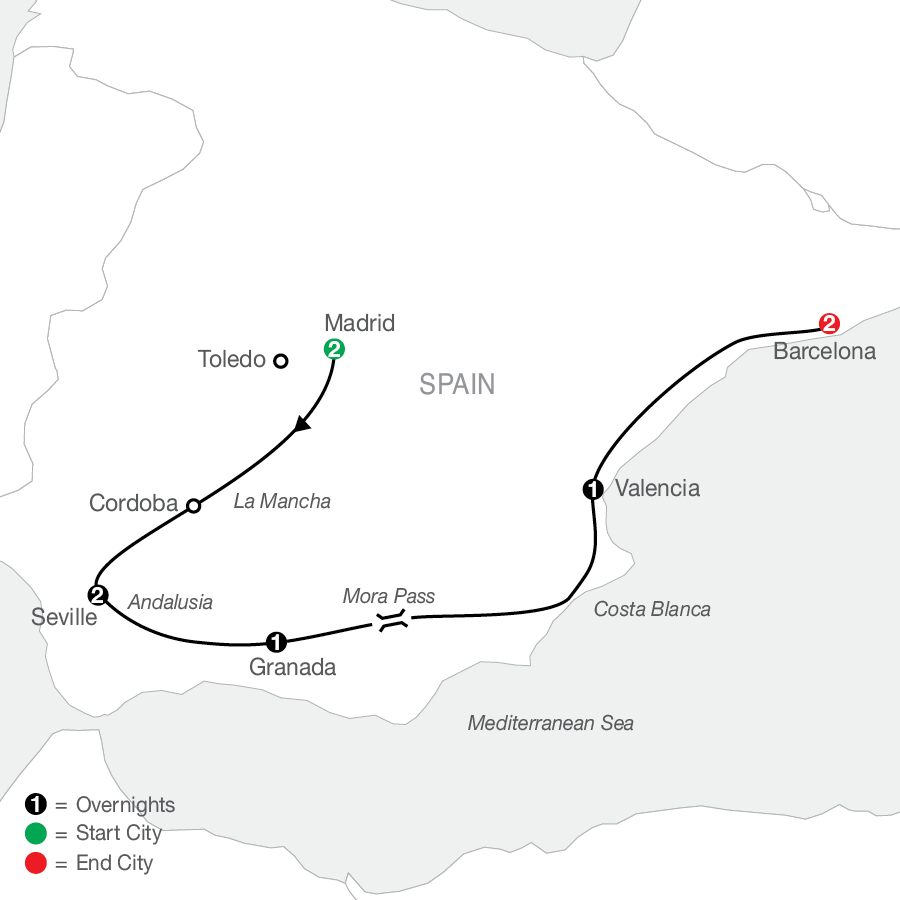 Highlights of The Best of Spain

ARRIVE IN MADRID, SPAIN Welcome to Madrid! At 6 pm, meet your Tour Director and travel companions for a welcome dinner at your hotel. (D)

MADRID Masterpieces in Madrid MADRID Guided sightseeing includes the Prado Museum and sights of the Cibeles Fountain and Calle Alcala. (B)TOUR HIGHLIGHTART & ARCHITECTURE The Prado Museum houses one of the world’s largest art collections, including its amazing assortment of masterpieces by historic artists like Velasquez, Goya, and El Greco. The famous museum also displays the works of renowned European masters, including Rubens and Rembrandt, along with a stunning collection of Greco-Roman statues.

MADRID–CORDOBA–SEVILLE Treasures of Cordoba CORDOBA Guided walking tour includes the Mosque of the Caliphs. Enjoy free time to browse before departing for Seville. (B,D) 354 mi / 570 kmTOUR HIGHLIGHT ANCIENT ARCHITECTURE The Mosque of Córdoba (Mezquita-Catedral de Córdoba in Spanish) today is a Catholic cathedral but was originally a mosque built for Muslim prayer by Abd ar-Rahman I in the 8th century. The mosque’s architecture is rich in dazzling detail, with over 800 granite and marble pillars supporting its beautiful brick and stone arches - a major focal point in the mosque along with the soaring bell tower – the tallest structure in the city.

SEVILLE–GRANADA Splendid Spain GRANADA Guided walking tour includes the Alhambra complex and the Water Gardens of the Generalife. (B) 155 mi / 250 kmNOTE:Day 5 Alhambra complex: Entrance to Nasrid Palace is not guaranteedTOUR HIGHLIGHTARCHITECTURAL GEMS Granada’s Alhambra Complex stands as one of the largest ancient aristocratic sites of Western Muslim culture. Its leafy lanes and streams enhance the grand water gardens of Generalife, at the once summer palace and country estate of the Nasrid rulers.

VALENCIA–BARCELONA The Boulevards of Barcelona Scenic drive along the coast en route to Barcelona.BARCELONA Enjoy free time this afternoon and evening. (B) 211 mi / 340 kmFREE TIME TIPSEXPLORE MORE in Barcelona in the footsteps of Picasso through the historic heart of the old city. Indulge in the tradition and tastes of 2,000 years in the Gothic Quarter. Take in the charm and captivating history with a walk down the tree-lined avenue of La Rambla amid the terraces and street performers on Barcelona’s famous thoroughfare.

BARCELONA Safe travels until we meet again! Your vacation ends with breakfast this morning. (B)