When you stroll through Croatia’s leafy towns, enjoy a walk in a national park, and marvel at its sparkling emerald lakes, it’s easy to see why other countries are green with envy. With its glorious coastal cities, ancient Roman ruins, magnificent medieval architecture, and stunning natural wonders, Croatia has it all. On this Undiscovered Tour of Croatia and Slovenia, you will see what European vacationers have long tried to keep secret from the rest of the world—impressive caves and castles, spectacular waterfalls, and walled cities, picture-perfect shorelines, and famous film locations. Game of Thrones fans will recognize Old Town Dubrovnik as the medieval setting for the fictional city of King’s Landing, yet at the end of this dramatic vacation to Croatia, you’ll be perfectly happy with the start-to-finish storyline. 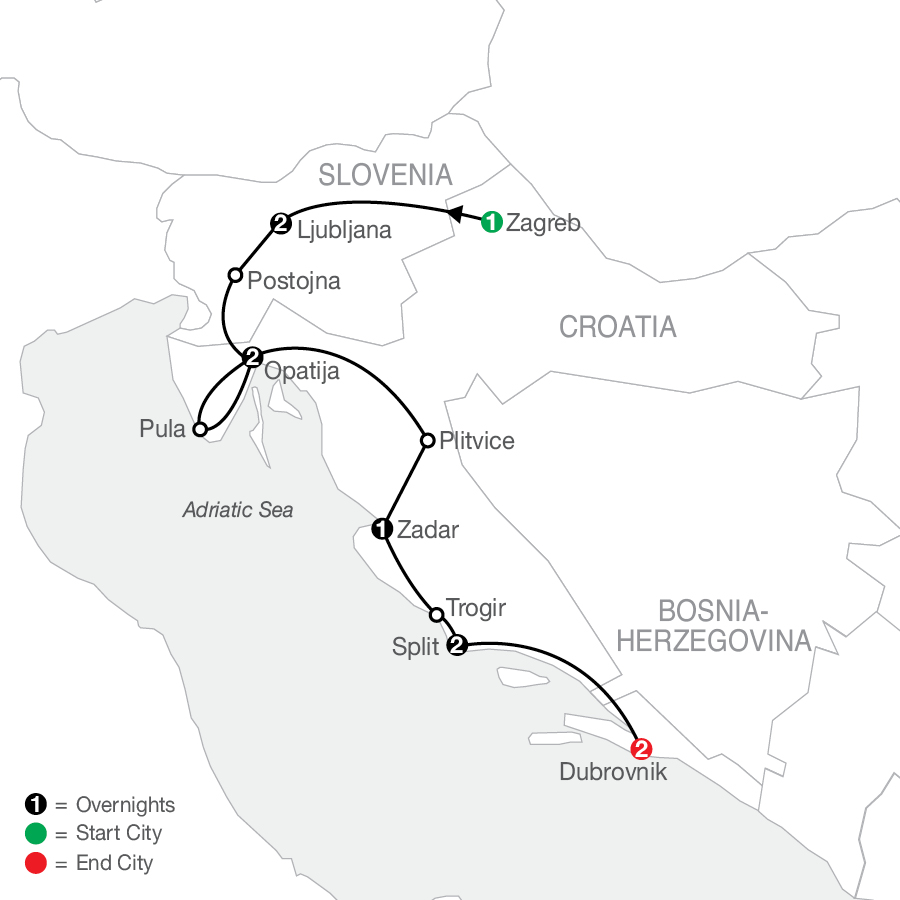 Highlights of The Croatian

We’ve packed everything you need for the perfect vacation—from hand-selected hotels and dining to the friendly expertise of Globus Tour Directors and Local Guides (with headsets to hear every word), to seamless transportation between destinations and VIP access to the world’s most iconic sites!

ARRIVE IN ZAGREB, CROATIA Welcome to Zagreb! At 6 pm, meet your Tour Director and travel companions for a welcome dinner at your hotel. (D)

ZAGREB–LJUBLJANA, SLOVENIA Landmarks & Legends ZAGREB Guided sightseeing includes sights of the Parliament and Stone Gate. Scenic drive into Slovenia en route to Ljubljana. (B,D) 106 mi / 170 kmTOUR HIGHLIGHTHISTORY & MYSTERY Explore the ancient city of Zagreb where Central Europe, the Mediterranean, and Southeast Europe meet with a magnetic culture amid medieval architecture and offbeat cafes and bars to enjoy. In the Upper Town of Zagreb admire the historic Croatian Parliament building and see the Stone Gate, the only fortification entrance that is still standing, and now home to the city’s most important shrine.

LJUBLJANA Castles & Dragons LJUBLJANA Guided sightseeing features the Town Hall’s inner court. Hear the history and heritage of the Hapsburg Dynasty here, and see St. Nicholas Cathedral. Free time this afternoon and evening. (B)TOUR HIGHLIGHT CULTURAL GEMS If you’re wondering why there are so many dragons decorating the cobblestone streets of Ljubljana, it’s thanks to the mythological heroes Jason and his Argonauts who stole the Golden Fleece and fled here. Legend has it that the dragon that lived here wasn’t too welcoming. For ages, the dragon of Ljubljana has been the protector and mascot of Ljubljana. Aside from green dragons seen from the cafes and bridges, this university town was voted 2016 Green Capital of Europe.

LJUBLJANA–POSTOJNA–OPATIJA, CROATIA Going Underground POSTOJNA [LF] Take a guided tour through the caves before continuing to Opatija. (B,D) 81 mi / 130 kmLOCAL FAVORITE NATURAL WONDER Explore the world's most captivating cave on an unforgettable ride on an underground train. Enter the surreal subterranean world of shiny white stalagmites shaped by millions of years and millions of drops of water in the Postojna Cave. See the baby dragons (Olms) who call the caves home - in the mysterious underground caverns of Slovenia.

OPATIJA. EXCURSION TO PULA Theatrical Sights Scenic drive through the Istrian Peninsula to Pula.PULA Guided sightseeing features the Amphitheatre and the Temple of Augustus. Free time to browse before returning to Opatija.OPATIJA Free time to walk along the seaside promenade and see the Maiden with the Seagull. (B) 130 mi / 210 kmTOUR HIGHLIGHT HISTORY & HERITAGE Marvel at the well-preserved Roman temple of Augustus in the ancient town of Pula which overlooks the Mediterranean Sea. Visit the amphitheatre used during Roman times as a venue for Gladiator fights, it is still used today for many important events.

OPATIJA–PLITVICE–ZADAR Into the Woods PLITVICE Join a guided walking tour of the national park. Take a scenic drive along the coastline en route to Zadar. (B,D) 199 mi / 320 kmTOUR HIGHLIGHT NATURAL WONDERS Croatia’s first national park, Plitvice Lakes is the oldest and largest national park in the Republic of Croatia. Lush forests, pristine lakes and wondrous waterfalls share this natural paradise with a wealth of wildlife, including wolves, bears, bobcats, and a bountiful species of birds. Words can’t do justice to this spectacular natural wonderland, so join us and see this spectacle of pure nature for yourself.

ZADAR–TROGIR–SPLIT Traditions & Tastes ZADAR Take a guided walking tour through the Old Town to the main square with free time for lunch.TROGIR Visit the historic city.SPLIT [LF] Enjoy dinner at a local restaurant. (B,D) 99 mi / 160 kmLOCAL FAVORITE LOCAL TASTES After exploring the historic squares of Zadar and Trogir, settle in for a sumptuous dinner at a local restaurant in the Croatian town of Split, for the perfect place to spice things up with authentic Croatian cuisine.

SPLIT The Emperor’s Escape SPLIT Walking tour with a Local Guide includes Diocletian’s Palace. Free time this afternoon and evening. (B)TOUR HIGHLIGHTA LEGEND SLEPT HERE Discover one of the world’s best-preserved monuments to Roman architecture with a walking tour in Split. You’ll see the spectacular Diocletian Palace that was built for the Roman emperor Diocletian at the turn of the 4th-century AD, and forms nearly half of the Old Town of Split. Having served as the emperor's villa, summer house, and military camp, this ancient palace evokes the power and strength of the Roman Empire.

SPLIT–BOSNIA–HERZEGOVINA–DUBROVNIK, CROATIA A King’s Landing DUBROVNIK Walking tour with a Local Guide includes the Rector’s Palace. Free time this afternoon and evening. (B) 162 mi / 260 kmTOUR HIGHLIGHTART & ARCHITECTURE It isn’t hard to see why the city of Dubrovnik is known as the “Pearl of the Adriatic.” The old town surrounded by its remarkable city walls is protected by UNESCO. Over the centuries this breathtaking city has been an inspiration to many artists. Game of Thrones fans may recognize this formidable setting and the Rector’s Palace as a film location for the epic TV series.

DUBROVNIK Mediterranean Magic DUBROVNIK Enjoy a free day in Dubrovnik, followed by a farewell dinner at your hotel this evening. (B,D)FREE TIME TIPSEXPLORE MORE with lots of ways to spend your day. Stroll along the streets of the old town, browse the shops, try out some more local specialties, try out some more local specialties. Tonight, raise a glass with your travel companions and toast an unforgettable vacation.

DUBROVNIK Safe travels until we meet again! Your vacation ends with breakfast this morning. (B)